Drawn to Life Wiki
Register
Don't have an account?
Sign In
in: Enemies, Lavasteam, Drawn to Life: The Next Chapter,
and 5 more

Robosa are robots resembling Raposa that appear in Drawn to Life: The Next Chapter. They are only found in Lavasteam.

The Robosa were originally made to help the miners of Lavasteam, but were re-programmed by Miney to force the miners to work harder. Robosa take orders through voice commands from whoever controls them using the master key. Robosa have an emergency fail-safe in case of catastrophic failure, in the form of a giant lever. Once the control panel with the lever is unlocked with a key, the head mechanic may remotely shut down all active Robosa.

The upper half of a Robosa greatly resembles that of a Raposa, keeping their characteristic ears and average height. Their lower half is built more like a mining machine with a bucket (or scoop) used to hold and move resources and with continuous tracks allowing the Robosa to move. The head is gray, like its body, with a golden-yellow trim on the corners. A wind-up key can be seen spinning in the back of a Robosa.

Before the villagers of Turtle Rock arrived in Lavasteam it is learned that Salem manipulated Miney into using the Robosa to make the other miners work harder and to make himself become king. A little while later after more Color is restored Miney overloads the Robosa with commands causing them to break down and go berserk. The only way to shut down the rogue Robosa is by finding Key, their creator.

Broken Robosa parts as seen in a level. 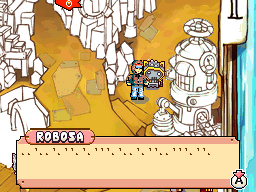 The Hero talking to a Robosa
Community content is available under CC-BY-SA unless otherwise noted.