“The Rope Module uses the latest in Galactic Jungle technology to allow Hero to swing and climb from one place to another.”

The Rope Module, also called Rope Leaf in Draw Mode, is a creation in Drawn to Life: The Next Chapter. It is first created in the Galactic Jungle level Iron Arboretum.

Once created, the Rope Module will hold a swinging rope or vine that The Hero can use to swing to different areas of the level. The Hero will automatically grab hold of the rope when it is within proximity after jumping. Once on a rope, the player can press the jump button (defaults to

) to release from the rope and jump to the next platform.

Additionally, The Hero may climb up and down the rope using the up and down buttons on the D-pad.

Occasionally, enemies such as the Vine Beetle will also be present on the rope. The Hero cannot defeat these enemies, thus it is best to simply avoid contact, as The Hero will fall from the rope if damage is received.

Due to the Rope Module being a creation object, the appearance is overall dependent on the player.

They are still confined to a 49px×49px area.

The pre-drawn guide creates a short, metallic pedestal with a blue, glass-like dome on top. Leaves and vines may been seen growing out from the middle of the two objects mentioned prior. 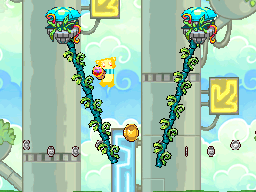 A Hero jumping from one vine to another. Note the zoom of the screen. 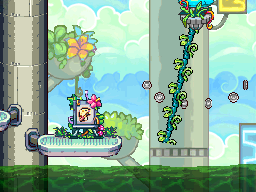 The area in which Rope Modules are first created.
Add a photo to this gallery

Retrieved from "https://drawntolife.fandom.com/wiki/Rope_Module?oldid=58005"
Community content is available under CC-BY-SA unless otherwise noted.