Drawn to Life Wiki
Register
Don't have an account?
Sign In
in: Drawn to Life: The Next Chapter, Characters, Raposa,
and 3 more

“Nice bridge. One less thing I have to do for Miney.”

Russet is a Raposa in Drawn to Life: The Next Chapter who resides in the east side of Lavasteam.

Miney ordered him to construct a bridge to the Lava Reservoir, but when The Hero stops by, Russet lets The Hero draw it for him.

Russet is an adult male Raposa with red-orange fur. He wears a blue uniform with a black tool-belt that has gold buttons over it. Like all miners, he also wears a yellow hard-hat. Additionally, his hard-hat has a flashlight built-in.

Russet has brown shoes, but no gloves. 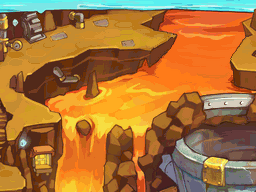 The location in which Russet resides.
Community content is available under CC-BY-SA unless otherwise noted.