Drawn to Life Wiki
Register
Don't have an account?
Sign In
Advertisement
in: Drawn to Life: The Next Chapter, Levels, Galactic Jungle,
and 4 more

Steely Thicket
“Okay Hero, find the generators. The sooner you do, the sooner we can get out of here.”

Scramble Tower is the fifth level in the Galactic Jungle in Drawn to Life: The Next Chapter. This is where the Main Generator is located, and where the Spider Form is unlocked. The color green is introduced for Action Draw during this level.

Once Color is restored to the second section of Galactic Jungle, the gang finds Click. Click claims that he tried to find them, but that they were nowhere to be found. Doubtful of Click's excuse, Jowee states that they need to see the Council. Click then says that he would naturally take the gang to the Council, but to do so, they need to use the Space Elevator. Jowee guesses that the elevator is broken, but Click corrects him and says that it needs three generators to power them. Jowee then guesses that these generators are missing, but Click corrects him again stating that they are difficult to access. Click then shows the gang the three buildings the generators are located. He then promises to take the gang to the Council once the generators were on. Before the Hero enters the levels, Click tells the gang that the main generator must be turned on before the auxiliary generators can be activated. He states that the main generator is in Power Station Block 4. The Hero is then sent to find the generator.

After The Hero finds the main generator, Click is shocked; then corrects himself and states that the D.O.T.R.O.T.P.O.T.U.S.F. thanks the gang for their assistance. He then reminds them that the auxiliary generators must still be powered. He also states he will go begin filling out the requisite paperwork that the gang is 'reluctant to do'. He finishes by saying he'll wait for their return, then they can go to the Council together. After speaking, Click runs off. The Hero is then sent to find the other two generators while Sock and Jowee hunt down Click. 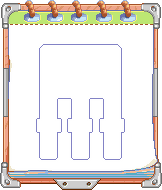 Spider Form
This list only includes creations that are first drawn, or can be redrawn, within this level.