Drawn to Life Wiki
Register
Don't have an account?
Sign In
Advertisement
in: Enemies, Shadow, Drawn to Life,
and 2 more

Shadow Ghouls are enemies in Drawn to Life. They first appear in a total of three levels in the game, the first of which being Gearworks.

Shadow Ghouls will patrol an area and fly after The Hero if they come too close. They are the strongest of the pure-Shadow enemies, taking four normal hits to destroy.

Shadow Ghouls are slightly bigger than Shadow Walkers and are made entirely of Shadow. They have a roughly humanoid shape, however they have no legs, and thus move around by levitating and/or flying. They have long arms and a horned head.

They appear to have two eyes, but often only one can be seen. 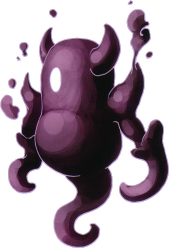