The Shadow Lair is the final level of Drawn to Life.

Shadow Goo is used excessively in this level. The final boss is Wilfre, along with his scorpion. Wilfre's Scorpion is the first half of the battle, and after the scorpion is defeated, The Hero faces Wilfre. 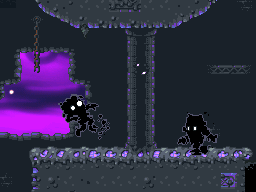 Shadow Walkers in this level.
Add a photo to this gallery

Retrieved from "https://drawntolife.fandom.com/wiki/Shadow_Lair?oldid=57966"
Community content is available under CC-BY-SA unless otherwise noted.