“Shadow monsters and shadowy guys. I...I don't like where this is going...”

Shadow Walkers are common Shadow enemies in Drawn to Life: The Next Chapter (Wii). They appear in almost every level in the game, excluding those of Jangala.

There are two variants of Shadow Walkers in the game, and they both have different behaviors.

The "Jumper" variant of the Shadow Walkers will tend to only jump around in a predetermined space. They don't target the Hero, and they don't react to any other enemies.

The "Shooter" variant of the Shadow Walkers will stay in one place on the map, shooting blow darts at the Hero from a distance. When The Hero lands behind the Walker, it will disappear, leaving only its eyes and mouth visible. In this state, it is immune to attacks.

Shadow Walkers are tall beings composed entirely of Shadow. They are almost completely black, with the only other color on their bodies being the whites of their eyes and mouth. They are anthropomorphic, standing upright and having two arms and legs. The shooter variant of the Walkers hold a completely black dart gun in their hand and use it to shoot at the Hero. 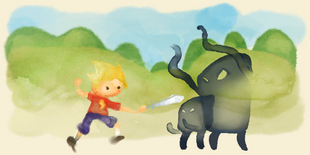 Shadow Walkers as seen in the first cutscene in Drawn to Life: The Next Chapter (Wii) 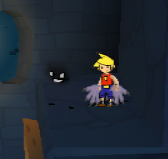 A Shadow Walker variant turning invisible in Drawn to Life: The Next Chapter (Wii).