Drawn to Life Wiki
Register
Don't have an account?
Sign In
Advertisement
in: Enemies, Enemies in Drawn to Life: The Next Chapter, Watersong,
and 2 more

Invincible to the Player

Sheepdogs are enemies in Drawn to Life: The Next Chapter that first appear in Watersong.

Sheepdogs are small, fluffy creatures with two dark brown ears/antlers. Their fur is fluffy and light-brown with lighter colored tufts on the top of their heads and near their mouth. The tuft of fur near the mouth resembles a beard or moustache.

Sheepdogs have two solid white eyes, much like Baki. 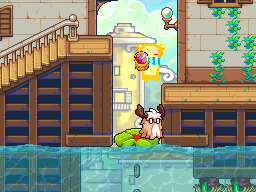 A Hero stuck on a Sheepdog. It can be extremely difficult to move from this possition.
Community content is available under CC-BY-SA unless otherwise noted.
Advertisement