Not to be confused with The Shooter Ship.

“The Shooter is a ranged weapon that Hero can use to launch projectiles.”

The Shooter is a long-ranged projectile weapon that The Hero can wield in Drawn to Life: The Next Chapter.

Unlike the similar gun weapons that were used in the previous installment, the Shooter has an unlimited amount of shots and the projectiles always fly straight. This is useful for picking off enemies at a distance. The Shooter, after being purchased for 250 Rapo-Coins, can be upgraded at Isaac's Shop to Rapid Fire for 750 Rapo-Coins, then to Hypershot for 1,500 Rapo-Coins.

Each projectile deals one

of damage and does not penetrate enemies. 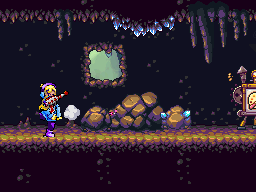 A Hero using the drawn present for this weapon.
Add a photo to this gallery
Retrieved from "https://drawntolife.fandom.com/wiki/Shooter?oldid=57909"
Community content is available under CC-BY-SA unless otherwise noted.