“You both give me an idea… we should have a village snowball fight! Hero versus everyone!”

The Snow Fight is a minigame in Drawn to Life. The Hero first plays it early in the game as part of the storyline. This minigame can be purchased and replayed later in Isaac's Shop, where it is placed within the "Music and Games" category.

In the minigame, all of the villagers are grouped together in a sort of "team", playing against The Hero. The Hero's goal is to reduce all of the villagers' health points to zero by hitting them with snowballs, without their own health points reaching zero, thereby winning the game. Each villager can take three hits before they are knocked to the floor and out of the game. If The Hero is hit five times by enemy snowballs, they will lose the game.

An info prompt telling The Hero to get ready for the fight.

An info prompt telling The Hero how to move during the fight.

An info prompt telling The Hero how to collect more snowballs.

An info prompt telling The Hero about the Snow Fight's availability in the shop.
Add a photo to this gallery 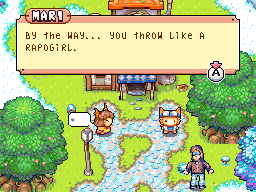 Mari teasing Jowee before the fight. 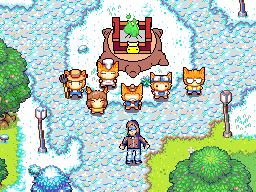 The villagers and a Hero after the Snow Fight. 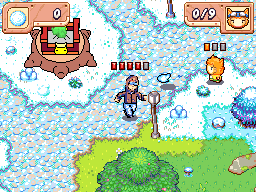 A Hero being attacked by a villager during the Snow Fight. 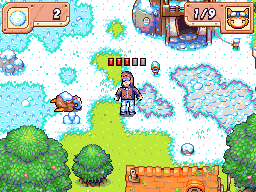 A Hero standing over a villager that lost the Snow Fight.
Add a photo to this gallery
Retrieved from "https://drawntolife.fandom.com/wiki/Snow_Fight?oldid=57375"
Community content is available under CC-BY-SA unless otherwise noted.