Snow Warriors are an enemy in the third gate of Drawn to Life: The Next Chapter (Wii). They are the only enemy to appear in every Icy Wastes level.

Snow Warriors are some of the only non-ranged enemies that actively target the Hero. When they spot the Hero, they will run towards them, spear pointing out.

Snow Warriors are light blue, humanoid creatures, with two, bulbous white eyes, a purple nose similar to that of a Bonobo, and blue bangs. They wear a brown parka of varying shades that cover their entire body, with the exception of their face. In their left hand, they carry a spear which is presumably made of ice. 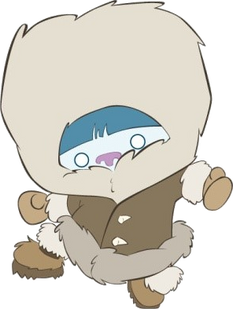 The Snow Warrior as seen in concept art for the game.