Drawn to Life Wiki
Register
Don't have an account?
Sign In
Advertisement
in: Featured Articles, Enemies, Drawn to Life,
and 3 more

“Watch Out!
Shhh! Walk slowly past the sleeping snowget!
”

Snowgets are enemies found in the Snow Gate.

When Snowgets are first seen, they are sleeping. If The Hero jumps or runs near them, they will wake up. To avoid fighting them, The Hero can walk by tapping the control pad instead of holding it to run.

Snowgets resemble snowmen and wear purple top hats, along with an orange scarf. They also have long arms and hands with three fingers, which are likely made out of sticks. 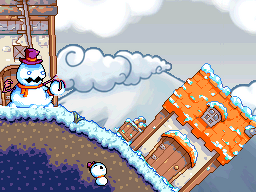 Snowgets in a level.
Community content is available under CC-BY-SA unless otherwise noted.
Advertisement