Not to be confused with Spikes.

“There's nothing like a nice, relaxing view over the lava.”

Spike is a Raposa in Drawn to Life: The Next Chapter. He resides in the east side of Lavasteam near the lavafall.

Spike is the classic, nice old man character. He shares stories and gives greets to the villagers that pass by.

Spike is an old man Raposa with dark grey fur, a white mustache and beard, and white sideburns. He wears a green jumper. 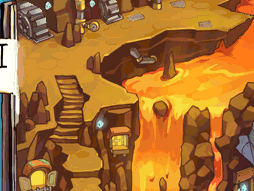 The area in which Spike resides.
Add a photo to this gallery
Retrieved from "https://drawntolife.fandom.com/wiki/Spike?oldid=57934"
Community content is available under CC-BY-SA unless otherwise noted.