“When you wish upon a star... Create a star to pass this area!”

Stars are creations that are drawn in Star Forest. They are disappearing platforms that appear for a few seconds and then disappear again.  A few seconds later they once again reappear.  The pattern is fairly memorable, and they are easy to jump across.  Stars also appear in the Shadow Lair.

Stars are also used by Wilfre in the final battle as one of his two attacks (the other being Tridents).  He will make three Stars drop down from the sky in order to try to hit The Hero.  The last Star is almost always aimed directly where The Hero is/was.

Due to the Star being a creation object and having no pre-drawn preset or guide, the appearance of this object is completely dependent on the player. 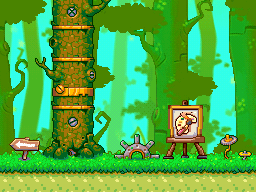 Retrieved from "https://drawntolife.fandom.com/wiki/Star?oldid=46553"
Community content is available under CC-BY-SA unless otherwise noted.