“Our hero needs a submarine!
Don't forget the screen door!”

The Submarine is a creation in Drawn to Life. It is drawn and used in the Snow Caves, where The Hero uses it to move around underwater before obtaining the flippers and helmet. 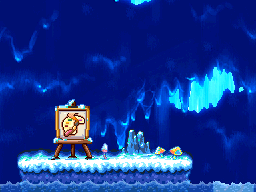 A yellow submarine appears on the Snow World level select map.
Add a photo to this gallery
Retrieved from "https://drawntolife.fandom.com/wiki/Submarine?oldid=55875"
Community content is available under CC-BY-SA unless otherwise noted.