Techno Spires is the eighth level in the Galactic Jungle in Drawn to Life: The Next Chapter.

Once Color is restored to the second section of Galactic Jungle, the gang finds Click. Click then claims that he tried to find them, but were nowhere to be found. Doubtful of Click's excuse, Jowee states that they need to see The Council. Click then says that he would naturally take the gang to the council, but to do so, they need to use the Space Elevator. Jowee guesses that the elevator is broken, but Click corrects him and says that it needs three generators to power them. Jowee then guesses that these generators are missing, but Click corrects him again stating that they are difficult to access. Click then shows the gang the three buildings the generators are located. He then promises to take the gang to the council once the generators were on. Before the Hero enters the levels, Click tells the gang that the main generator must be turned on before the auxiliary generators can be activated. He then states that the main generator is in power station block 4. The Hero is then sent to find the generators.

After completing Lunar Rise as well as this level and turning on the auxiliary generators, the gang searches for Click. However he is nowhere to be found. A S.P.U.D. then appears and says Click has been banished from the D.O.T.R.O.T.P.O.T.U.S.F. When asked why, the S.P.U.D. states he tried to infiltrate The Council. The S.P.U.D. then calls it a trespass of the worst kind, and recommends the gang should leave immediately since the council is upset and that there are fates worst than banishment. Once the S.P.U.D. vanishes, Jowee decides they have to get into the council room, "Click or no Click". 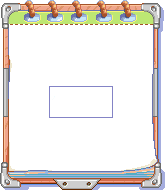 Switch Activated Platform
This list only includes creations that are first drawn, or can be redrawn, within this level.

“You took my coins!!! Well, I guess if you are saving me, its all right then.” 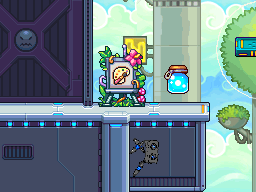 A Hero in their Spider Form in an area of the level which is normally inaccessible.
Add a photo to this gallery
Retrieved from "https://drawntolife.fandom.com/wiki/Techno_Spires?oldid=56085"
Community content is available under CC-BY-SA unless otherwise noted.