Drawn to Life Wiki
Register
Don't have an account?
Sign In
Advertisement
in: Featured Articles, Drawn to Life: The Next Chapter, Galactic Jungle,
and 3 more

The Council is the head of the totalitarian puppet-government of Galactic Jungle in Drawn to Life: The Next Chapter. The Council is composed of six puppet entities, which supposedly create and enforce the rules for the D.O.T.R.O.T.P.O.T.U.S.F.

The Council rooms are located in space, in the western portion of the village.

After the previous mayor of Galactic Jungle died without an heir, Click secretly created The Council in an attempt to restore order to the village. Click later went to passing and enforcing more absurd and controlling laws through use of The Council and S.P.U.D. while he pretended to be a simple messenger.

After The Hero, Jowee, and Sock arrive from Turtle Rock, Click greets the group and clumsily informs them about the village. After the group continuously insists on meeting The Council, Click begins to make excuses and tries to make doing so more difficult. Shortly after, he tells the group that they're no longer welcome to meet The Council and leaves them to fend for themselves. The group eventually make their way to the Council Room on their own, only to find it populated with puppets instead of Raposa. After investigating, they find a hidden entrance to a control room where Click is seen manipulating the S.P.U.D. and controlling speaker and computer systems.

The Council Room is a tall, round room almost completely made of marble (with the exception of the red carpet at the entrance). It is solely illuminated by the green tank at the back of the room. There are six concave indentations in the wall which store four large decorative chess pieces. One indentation, covered by a light-green curtain, provides access to the hidden Control Room. At the center of the room, an elevated circular table sits. It is surrounded by six council members sitting on stools.

The Control Room contrasts greatly with the sleek, simple Council Room. The interior here is crowded with many screens which vary in size and style, lights, computers, and other monitoring equipment. The floors and walls here are made of metal and a single, large, rotating seat sits in the center of the room. 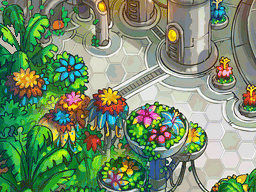 The space-elevator supposedly provides an alternate means of access. 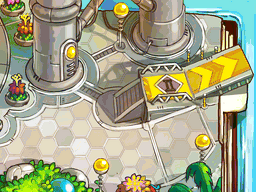 A rocket ship is drawn to allow the group access to the Council Room. 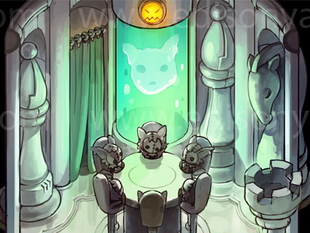 The Council
Community content is available under CC-BY-SA unless otherwise noted.
Advertisement