Drawn to Life Wiki
Register
Don't have an account?
Sign In
Advertisement
in: Featured Articles, Drawn to Life: The Next Chapter, Levels,
and 5 more

“Okay, everything is ready. We're going to get to the bottom of this, Hero.”

Once everything is ready, Jowee, Sock, and The Hero try to get to the bottom of everything, and enter the Council Room to see The Council. The player then enters the level and goes through two sections before the gang regroups at a dead end. While Jowee tries to figure out how to get into the council room, Sock spots the Queen in the sky. Eventually, Jowee spots the unknown object as well. The gang then goes back to the spaceship to take it down. The Hero then defeats the Queen and King using the Spaceship.

Once the Queen and King are defeated, The Hero meets up with the rest of the gang. After Jowee congratulates the hero, Sock finds a secret entrance that leads to the council room. Just as they were about to enter, a large amount of S.P.U.D. teleport in front of the entrance. The S.P.U.D. tell the gang that their request for an audience has been denied, and that they have 3 seconds to vacate the premises. Jowee then states that the gang will not leave until they see the council. After the spud countdown from 3, they stay still and do nothing. Jowee then inspects them and states that the spud are just holograms. He then touches one, and the S.P.U.D. disappear one by one until one is left. The single S.P.U.D. looks around confused, and then teleports away. The gang then enters the council Room to finish it once and for all. They wonder about the room and it's purpose when they see that the members of the council are actually dummies. Jowee and the hero try to go beyond a green curtain, when a head-figure appears. The figure tells the gang that they are not welcomed there, and they should leave or face the horrible consequences. Jowee then asks the figure who it is, and what it has done to the council. The figure responds saying that the group's 'insufferable foolishness' will cost them, and that the council will never see them. Jowee argues with the figure and states that there isn't a council, but a room of dummies instead. The figure then begins to count down from 3, when Jowee interrupts it and goes through the curtain anyway. The Hero follows Jowee through the curtain into a control room. They then find Click in the room and realize he was behind the madness. Click tries to leave the room, but is blocked by the Hero. Jowee then asks Click if everything has been him the whole time. Click responds saying that they can't understand and that he had no choice. Click goes on to explain that the old mayor had died without an heir, and that the village went into despair. He stated that the village needed rules, and someone to lead, guide, and protect the village. Jowee then asks Click if he leads them with fear and lies. Click then says that things just got out of hand, and he was just trying to protect the people. Click also admitted that all the work he did is exhausting. Click then goes on to say that Wilfre suggested to create the space fortress. Shocked, Jowee asks if Wilfre is behind everything. Click then asks Jowee if he knows Wilfre. Frustrated, Jowee states that he knew there was something troubling about this place. Jowee and The Hero start to leave to stop Wilfre when Click stops them. Click says that the gang can't leave him. He says that the villagers will banish him or worse when they find out what he has done. Jowee then says they will help Click if he promises to never do something this stupid again. Click accepts Jowee's offer. Even though Jowee seems skeptical of Click, he helps him anyway. Click then explains his actions to the villagers of Galactic Jungle. At first the villagers see what Click did as an outrage, and suggest banishment. Before the villagers could banish Click, Jowee sticks up for him and says that he thought Click did what he thought was best for everyone. Jowee then turns torwards Click and states that he was however misguided. Turning back to the villagers, Jowee states that Click did everything he could to keep the village together after their Mayor died. He then added that Click's actions seemed like a noble cause to him. Moani asks Jowee what the village can do now without an heir nor a council. Jowee responds by saying that Click has kept the village together for years. He then asks why not choose him as the new Mayor. Hoaka then begins a vote asking all in favor of Click becoming the new Mayor to say 'aya wata'. One by one, the villagers say 'aya wata'. Kamalah is hesitant, but she too says 'aya wata'. Click thanks the gang for saving the village, and asks how the village can repay them. Jowee then tells Click to never listen to Wilfre again.

The gang finally return to Turtle Rock, and are greeted by Pirate Beard. Jowee sadly reports that he hasn't found anything about Heather or Mari at the Galactic Jungle. Pirate Beard then tells Jowee to Buck up, and that it's time to figure out where to go next. He then calls the 'swabs' to the map room. Soon Mike, Isaac, Sock, Pirate Beard, and Jowee head into the Map Room. 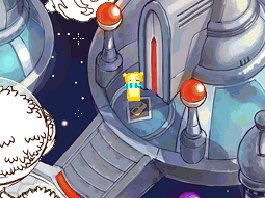 Treetop Turrets from the world map.
Community content is available under CC-BY-SA unless otherwise noted.
Advertisement