Drawn to Life Wiki
Register
Don't have an account?
Sign In
Advertisement
in: Non-Canon, Drawn to Life: The Next Chapter (Wii), Jangala,
and 2 more

Shadow City Outer Walls
“So, until Circi learns something new, let's hope the Monkey King will have some answers.”

Treetop Village is the sixth and final level of Jangala and the sixth level of the game overall.

Jowee and the Hero return from Jangala Falls with Pirate Beard's map, and he shows the two a secret path into the Treetop Village, home of the Monkey King. Jowee begins to question whether or not the Monkey King would want visitors after not being seen for years, but Pirate Beard reassures them that if they treat the King with respect, then they will either be fine or made into stew.

The two then go to see Mari who tells them that Circi is re-examining the clues thus far, and wishes that Mike were available to help with one of his machines, but he is apparently out on business. She then tells Jowee and the Hero that she hopes the Monkey King will have the answers they are looking for.

The Monkey King argues that he was protecting Zsasha from the "Bad Inkies" that were invading the Throne Room, and he wouldn't let him leave until they were gone. With that, the Hero climbs up the Throne Room, taking out the Shadow Walkers as he climbed. When they get to the top, the Monkey King explains that the Walkers had invaded for the Crystal Mask, and so the Monkey King gives it to the Hero. He also releases Zsasha to the Hero, and invites them to come back anytime.

Pineapple
This list only includes creations that are first drawn, or can be redrawn, within this level. 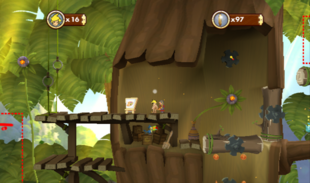 The area where the Tribal Mask is drawn. 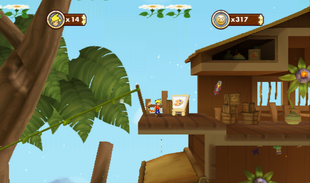 The area where the Lemon is drawn. 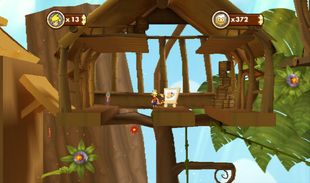 The area where the Banana is drawn. 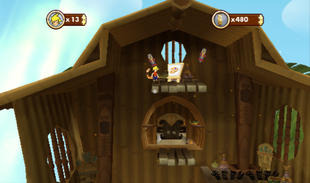 The area where the Pineapple is drawn. 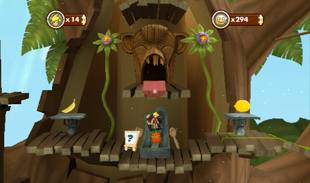 The entrance to the Monkey King's throne room with all three fruit offerings. 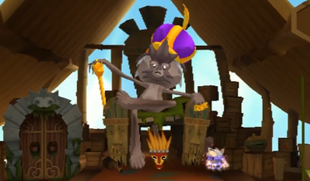 The Monkey King, Crystal Mask, and Zsasha in the throne room.