Not to be confused with Accelerator Ring.

“They had the technology to rebuild it! Now Hero can control when the turbo ring fires for maximium efficiency.”

The Turbo Ring 2, also called the Space Turbo Ring V2.0, is a creation in Drawn to Life: The Next Chapter. It is first created in Galactic Jungle's first level; Cosmic Bog.

Unlike the original Turbo Ring, the direction the Hero is shot can be determined beforehand by the player.

Due to the Turbo Ring being a creation object, the appearance is overall dependent on the player.

The preset for the Turbo Ring resembles a pink flower within a round bubble-like object. 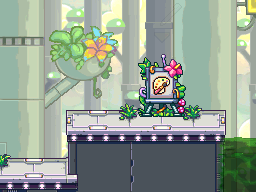 The drawing prompt for this creation.
Add a photo to this gallery
Retrieved from "https://drawntolife.fandom.com/wiki/Turbo_Ring_2?oldid=62458"
Community content is available under CC-BY-SA unless otherwise noted.