Drawn to Life Wiki
Register
Don't have an account?
Sign In
in: Characters, Raposa, Drawn to Life,
and 7 more

Unagi is a secret agent that wears a black suit and glasses, assigned to protect The Mayor. He considers Cricket and his security ways old-fashioned.

He is a trope of an agent, sporting a black suit and sunglasses. He has yellow fur, and always has a cell phone and briefcase with him.

He and his workers are saved at Windy Hills and when he returns he tries to take over Crickets security. He also is one of the first to be at The Mayor's side after he dies. The Mayor's death seems to affect him deeply, and after the game is completed he guards the Village Entrance, saying, "We will protect Mari with our lives!"

Unagi, along with Cricket and Zsasha, are dropped in the Galactic Jungle by Wilfre's portal where he is arrested for "use of technology without the correct form". 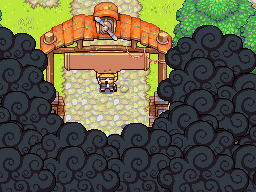 The area where Unagi resides after the completion of the first game.
Community content is available under CC-BY-SA unless otherwise noted.