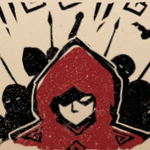 A PROUD DROOGLE. From a tribe of raposa with squarish heads and short, pointed ears. They have a curious and obscure history.

Jacob is a (c)hunk - clad in a fine green and blue patterned robe. He has the characteristic square head and pointed dorito triangle ears and dark eyes. His long sable locks cascade past his shoulders, down his back.

He was born in the kingdom of Brookwood, where droogs are persecuted by the reigning raposa regime; upon entering adulthood he was chosen by the King of Brookwood's Seer, a woman named Seyches, to be her apprentice. With a teacher like that, well.

The last thing Seer Seyches taught Jacob was the Droogish people's fate. Many years ago, the same King that still presided over Brookwood had ordered the destruction of the tribe. Jacob's parents, then children, had experienced the loss of their own parents. The ruler then placed a taboo on the subject, forbidding all to discuss the violence of that bloody time. And when the King instituted his schools, the wound seemed so great as to be impossible to heal, as policy dictated that Droogish children be handed over to the schools where they would then live, study and work til sayyyy about 12 years.

And then there was the dream. The creator's sacred places are, of course, everywhere in the world. In Jacob's case, he was in an area of swampland within the city when, beneath the cypress, a vision came to him, or something like a waking dream... User:Architect-visionary/Jacob

A tall, rust-colored raposa with shadow on half her body. She travels where she can, searching for clues to her amnesia. She has no particular abilities, but uses a variety of knives when it comes to combat. She has short, curly hair on her head and her signature clothes are a dusty old jacket and a white scarf. She has reddish brown fur with black arms, legs, and ears, and often hides her face beneath a cloak.

Retrieved from "https://drawntolife.fandom.com/wiki/User:Architect-visionary?oldid=56780"
Community content is available under CC-BY-SA unless otherwise noted.