Tajir talking about his apartment in Howland and ForestStream as a whole.

Tajir Makimoto, previously Todd Liad, is a young-adult Raposa originally from Ashville, Lavasteam. He moved to ForestStream around the age of 18. Here, he traveled through many parts of Eastern ForestStream before finally settling near the north-eastern border of Howland, Foreststream.

Currently, Tajir lives in Avilia Flats Apt. half an hour away from Rivera Lowlands National Park and Atkinson Lake.

He works as a park ranger at Rivera Lowlands National Park. Occasionally, he also volunteers as a fire lookout during Summer.

Mostly through habit, he uses this false, more brash, demeanor as a means of hiding his true feelings and perceived weaknesses and to come off as being stronger—both physically and emotionally—than he actually is. Tajir finds it difficult to fully break from this disposition, even when around people he trusts. Because of this, he finds it challenging to effectively convey or express his emotions, concerns, or problems he may be facing.

When faced with a personal issue or negative experience, Tajir may attempt to simply ignore the issue or emotionally force himself past the experience, even if in doing so he hurts himself more. For example, when finally confronting an aforementioned issue, Tajir may become overburdened to the point of collapse.

Tajir is aware of this fault as has been working to move past it, successfully doing so around 603.

Due to his underlying considerate and amicable nature, Tajir has little difficulty getting to know, and befriending, new people. Even through an outside perspective, many view Tajir positively through his optimism and outgoing friendliness.

Tajir, then known as Todd Liad, was born to Candace Liad Smith and Brandon Smith Liad on Summer 36, 581 in Ashville, Lavasteam.

Growing up, Tajir spent most of his time playing outside or spending time with family.

On Winter 82, 595, Tajir's father passed away from an illness. After this incident, Tajir's mother started to become more distant, despondent, and would occasionally ignore Tajir altogether. Additionally, she sometimes only spoke in passive-aggressive remarks or degradingly to Tajir. This, paired with the loss of his father, left Tajir in a vulnerable and confused state. After a fight with his mother in 599, Tajir, at the age of 18, ran away to ForestSteam via Warp Gate, taking only but a few of his most cherished possessions and changing his name and appearance in the process.

Upon arriving in ForestStream, Tajir traveled through many areas of country's eastern coast—notably Rivera and northern Sallis—before finally going west of the Rivera Mountains to north-eastern Howland. Here he applied to become a park warden at Rivera Lowlands National Park. Upon being accepted into the new job and saving up money, he spent the remainder of his previous funds on a more permanent residence at Avilia Flats Apt. Even after settling into his new home and with a more stable income, Tajir spent a bulk of his time away from his new residence.

Tajir later met Akito, around 600, at Laurel Recreational Center and the two eventually became friends through other encounters. Following this, Tajir also met Manere and befriended Kara. Tajir began to develop romantic feelings toward Akito two years after their meeting. Not long later, Tajir offhandedly and jokingly confessed these feelings to him. Akito, despite already knowing and reciprocating his feelings to an extent, denied Tajir for the time being, fearing that a relationship between them at this current time would only lead to them using each other as a means of moving past each of their individual issues—Tajir's problems stemming from his mother and Akito's original feelings for Manere—rather than it being a stable or healthy relationship built on love. Akito told Tajir that, though he sees him as someone he could possibly love at some point, neither of them would be ready to commit to a more serious relationship. Though slightly disappointed, Tajir agreed with this and began working to resolve the issues caused by his mother and also forgiving her, while Akito worked on getting past his initial feelings for Manere.

Eventually, Tajir was able to contact his mother, explaining his situation and what has happened after he left, as well as his reasons for doing so. Additionally, he was able to hear her side of the story and what she had been going through and found himself able to forgive her for what she had done in the past, even if still distancing himself from her.

A year after this on Fall 65, 603, Tajir and Akito went together to the Festival of Lights as a date, marking the start of their relationship as couples.

In Winter, 604, Tajir changed his appearance a final time—in conjunction with his prior no longer using a false personality—and reverted to a style more similar to how he looked before running away to ForestStream.

Tajir is an orange furred, young adult, male Raposa of average height and build. Ignoring ear size, Tajir stands at 5ft 7in (1.70 meters); his total height, including ear size, is 6ft 2in (1.87 meters).

Tajir has blue-green eyes. He has long, wavy, fur that reaches the base of his neck and is often kept messy on top. The tips of his hair and ears are dyed a darker color. Tajir has two metallic black earrings near the top of his left ear.

He has three black fur-tattoos along his upper right arm which resemble tiger stripes. Tajir almost always wears a dark-brown leather cord necklace with a large claw that hangs from the center of the necklace.

Tajir's appearance changed slightly following Winter 605. He no longer wears his earrings; his hair is cut shorter, removing the dye; the dye on his ears is more washed-out; and his hair is more kempt and is combed to his left. In addition, his clothing style changed as well. Despite these changes, Tajir often still wears his claw necklace and the fur-tattoos on his right arm remain.

Tajir wears a pale purple short-sleeve v-neck t-shirt with a jagged hem. The shirt has a total of six grey stripes, three along both of the sides and the back. The center of the shirt has a large grey stylized "t" design, which is the Raposa equivalent to an English "T".

He wears beige shorts with utility loops on the ends of both legs. A secondary layer of brown jagged hemmed fabric extends a small distance from underneath the layer above it.

He wears red and white sneakers with "Alk" written along the tongue of the shoes.

He always wears his earrings and necklace for this iteration of the outfit.

Following 604, Tajir generally wears dark or dull-colored graphic tees along with simple cargo shorts. He seldom wears his earrings with this outfit as he did in the past.

Tajir wears a brown leather-like sherpa jacket with the Royal Seal stitched under the right shoulder. Depending on the temperature, he may forgo the jacket and instead choose to wear a solid grey or dark purple longsleeve shirt. He wears dark blue denim jeans which are slightly faded around the knees.

Though he still wears his necklace, he does not wear his earrings for this outfit.

His outfit consists of a thick-cloth beige button-up short sleeve shirt with a white collar which is always tucked in. On the left side of his chest, he has a dark red ForestStream Park Ranger badge pinned; on the right side, he has his name-tag pinned over top his shirt pocket. Completing the outfit, he wears dark green hiking pants, a black or brown belt, and grey steel-toed hiking shoes.

Also accompanying this outfit, Tajir wears a metallic-black handheld transceiver on the left side of his waist, a brown leather satchel, and a tan Mountie hat with a red band across the top.

During Winter, Tajir may opt to wear a white, faded dark-green, or a darker beige, long-sleeve undershirt. He doesn't wear his earrings for this outfit, and, in addition, he keeps his hair more well-kempt compared to other outfits. Despite this, he still wears his claw necklace, though it's generally tucked away under his shirt.

As of Winter 603, Akito is Tajir's boyfriend.

The two met on Summer 43, 600 at Laurel Recreational Center and eventually became friends through other encounters. After knowing each other for two years, Tajir began to develop a crush on Akito and eventually confessed this to him, albeit off-handedly. Akito, already aware of Tajir's feelings, refused to go further with a relationship despite seeing Tajir as a possible love interest. Akito, fearing that they'd both use each other and the potential relationship as a means of getting over their individual problems instead of the relationship being a healthy one built on love, told Tajir that though he sees him as someone he could love, he'd prefer to wait until he got over his original feelings for Manere and Tajir having the opportunity to deal with the issues concerning and stemming from his mother.

A year later, having dealt with, and discussing, the aforementioned problems, Tajir and Akito went together to the Festival of Lights as a date, marking the start of their relationship as couples.

Kara is Tajir's friend. The two are friends through Akito, and as such, do not often meet unless he is a part of the group. Still, the two share a decent amount of trust and share some interests of their own, such as music, art, and jogging.

Though she has a basic idea of what Tajir went through growing up, Tajir has never explained certain events of his past to Kara.

Manere is an acquaintance to Tajir. Tajir only knows Manere through Akito and Kara, and as such the two rarely interact on their own. Still, Tajir considers Manere someone he'd like to get to know better and perhaps befriend.

Tajir is vaguely aware of the crash Manere was involved in due to what he has pieced together from Kara and Akito, but remains unaware of Manere's control over Shadow.

Sam was Tajir's supervisor during his volunteering as a fire lookout during Summer, 600, just before being hired as a full-time park warden. Despite talking to her for weeks over his radio, Tajir knew very little about Sam and has never met her in person. The two have not talked or kept in contact since Tajir's volunteering term as a fire lookout ended. Tajir is happy to have been able to talk to Sam during his volunteering, and thinks of her an acquaintance.

Tajir sees Sam as optimistic, friendly, talkative, peppy, and a tad bit nosy. From what he has seen, Tajir believes that she treats her job much more casually than other employees of her rank, as she was never against bending rules or breaking protocol during his stay.

Tajir is very creative and enjoys various arts and crafts. He is especially skilled in the realms of pottery, music, and drawing. Though Tajir had been playing guitar since he was younger, he only picked up pottery and drawing after settling down in Howland.

Tajir plays an acoustic guitar. Most of what he knows he had learned from his father, though after settling in Howland he has since decided to take more formal lessons.

In addition to the above, Tajir is also very resourceful. Most of this resourcefulness comes from the time immediately after his move to ForestStream. 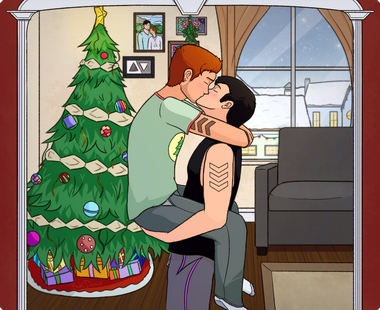 Tajir and Akito spending Christmas together. 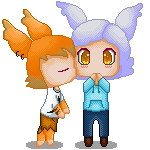 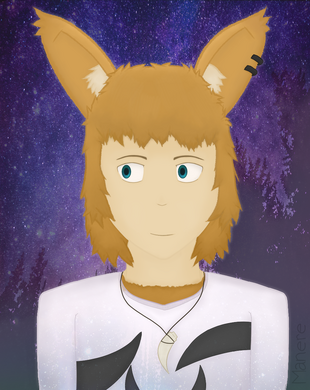 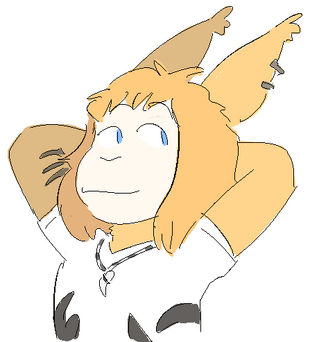 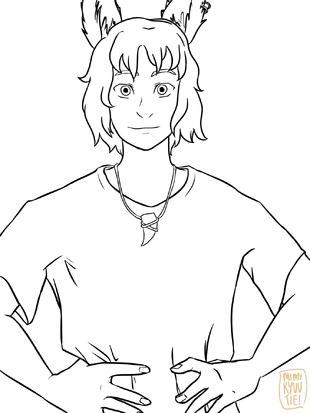 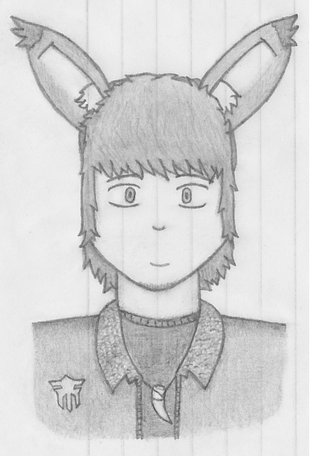 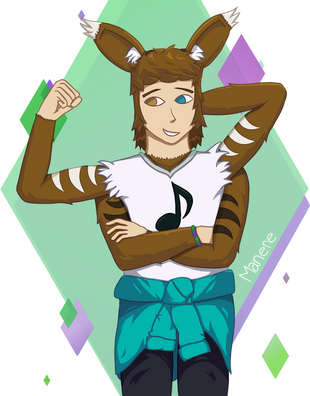 A fusion consisting of Tajir & Akito, following loosely the rules of Steven Universe. (This is not an ability the two actually possess.) 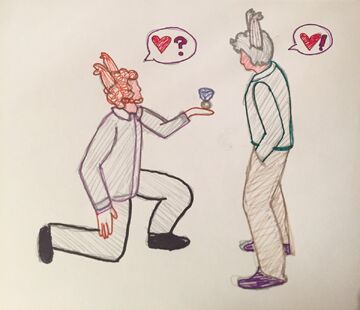 Tajir proposing to Akito.
Add a photo to this gallery 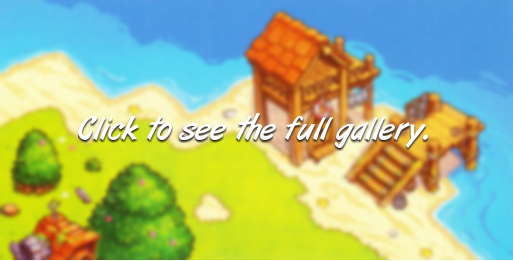 Retrieved from "https://drawntolife.fandom.com/wiki/User:BakiDance/Tajir?oldid=57167"
Community content is available under CC-BY-SA unless otherwise noted.