Bongo is a Flyin' Rabbit doll that was created by Polly. Due to him being a doll, he doesn't have much of a real personality.

Bongo is made of a blue-tinted white cloth, with pink patches on the ends of his ears. He has two beady eyes, and an almost 'cheshire cat-like' smile. He also wears a silver bracelet as a sort of hair tie for his ears.

A long time ago, back when Raposa lived in the Forest Gate region, there once was an old woman. She lived by herself near the Twilite Wood. Isolated from everyone she knew, this old rapo was dedicated to use magic to create life. After years of research, she decided to perform some tests. She sewed together a rabbit doll to test her magic on. While the test did give life to the doll, the old Raposa's soul was sucked into the doll. None had heard from her since. Here is where the curse began.

The doll, obtaining magical energy, came to life. However, it wasn't much of a life. The doll had no personality, no companions, or resources. There was only one thing it knew, and it was it's ability to use magic. It then decided to put it's energy to use. The doll wandered to a small town close by. It then went to attack and curse one of the villagers that approached it. After a while, the doll observed that the villager made another one of his kind after it cursed him. When the doll met with it's newfound companion, they decided to attack the rest of the town. The few that weren't cursed by a Flyin Rabbit fled to somewhere safe.

It is unknown how long a Flyin Rabbit doll lives. While many say that they are immortal, this is just an urban legend. More realistically, one of those dolls can live for a few centuries. However, how long a doll can live depends on multiple different factors such as it's lifestyle, the soul of their maker, and overall construction of the doll itself.

When Polly was brought to the woods, a Flyin' Rabbit attacked and enchanted her to create a rabbit-like doll. When Polly first made Bongo, it was nothing more than a doll. Over time however, Bongo absorbed Polly's love for the doll as a sort of energy source. This amount of energy wasn't nearly enough for Bongo to become completely conscious. At that rate, Bongo couldn't become a true living doll until Polly was in her 50's or later.

When Hunter left, Polly decided to look for Hunter herself. Taking Bongo with her, she walked up to the wall of shadow surrounding the village and called out to Hunter. Before she could enter the shadows, Cricket saw her near the wall of darkness. He then grabbed her by the arm, and tried to take her away from the scene. During the commotion, Polly dropped Bongo near the shadow wall. Seeing her doll on the ground, she escaped Cricket's grasp, and ran to get it. When retrieving Bongo, she willingly risked her life for the doll. Because of this, Bongo absorbed a large amount of energy. It was just enough energy to become conscious for a short amount of time. However, Bongo couldn't become conscious until Polly was alone. Bongo couldn't have witnesses for what he was destined to do. Before the shadow could engulf Polly, Cricket carried Polly away.

At The New Home

When Polly's family left the village, they built a new home in the forest. One night, while the Raposa slept, Bongo finally awoke. The doll then woke up the parents, and temporarily hypnotized them to follow it. The doll could have permanently hypnotized them, but that would've used up all of Bongo's energy. Bongo then took the couple as far as it could. Once Bongo felt like they were far enough, Bongo dropped the two off into a ditch where they both laid unconscious.

Bongo returned to the cabin just before Polly awoke. Before the doll could finish what it started, Polly began to wake up. Bongo quickly became limp so it wouldn't reveal its plan. The doll waited and waited for Polly to fall asleep again. It wanted to make sure Polly had no chance of fighting back. It took a long while, but Bongo finally got their chance. By the time Polly was fast asleep, Bongo got up and out of her grasp. The doll then attacked Polly, and absorbed her soul, leaving her body limp.

After gaining a strong energy source (Polly's soul), Bongo went back to where they left Polly's parents. If they could successfully attack them both, there would be two additional Flying Rabbit Dolls added to the population.

Before Bongo could get to them, the couple woke up scared and confused. They both remembered seeing Bongo walking around in the middle of the night, and nothing afterwards. They both wanted to return to Polly and make sure she was okay, but neither of them knew where they were.

Soon Bongo finally stumbled upon the Raposa. Since the hypnotism had worn off, the doll had to get them to look into it's eyes again. Bob, accidentally made eye contact with the doll and fell into a short trance. Luckily for him, his wife, Nixie, pushed him out of the way in time to avoid Bongo's attack. After that, the two realised that eye contact with the doll was a bad idea, and ran away as fast as they could. Bongo, not being incredibly fast, couldn't catch up with the Raposa couple. Once the two left it's eyesight, Bongo never seen the two Raposa again. At least, not for a long time.

The village never knew what became of Polly, Hunter, nor their parents for the longest time.

Once Bongo obtained Polly's soul, they began to wander the forest in hopes of finding someone to attack. However, Bongo never attacked a single Raposa. Bongo couldn't fly as well as he should have, and could barely attack anything. On top of this, Raposa were scarce in the forest. All raposa knew better than to live in the dangerous forest region. Well, almost all of them.

One day, Bongo finally spotted what seemed to be a raposa. The rapo was impossible to miss. They stood out completely in their odd getup. In fact it was so odd, that for a moment, Bongo questioned the species of the thing. It looked like a raposa, but it was sporting an outfit similar to a Baki. Thinking this was his chance, Bongo crept closer to the rapo. As Bongo crept even closer, he began to feel like he met this raposa before. Just as Bongo attempted to attack the strange raposa, they quickly turned around and dodged their attack. When Bongo saw this Raposa's face, he knew that they have met before. Apparently, The Raposa recognized Bongo back, and instead of running away, he froze and hid behind a nearby tree. They both stared at each other for the longest time until the Raposa called out to the doll. "Bongo? You're... alive?!" Somehow the strange Rapo knew Bongo's name. "Oh no... I must be dreaming again... or maybe I'm hallucinating. Ugh... I'm not sure... Umm.. Listen. It's me. Hunter. Do... do you know where Polly is? If anyone would know... it's you." After hearing his words, Bongo began to remember living with Hunter in the Raposa Village. He remembered growing up with him, and how he would sneak off into the forest gate. He remembered sharing Banya Cakes with him during the spring time, and ice cream during the summer. He also remembered how much he missed Hunter when he disappeared. He even remembered Polly. 'Wait. Polly? Where IS Polly? Wait a moment.'

Bongo soon realized that those memories didn't belong to him. Instead they belonged to Polly. 'Am I Polly?' He wondered. It would make sense. He does have her soul after all. 'But I never had those memories before... Why now?' Bongo, confused, stood in silence. The Familiar Raposa began to walk away, doubtful of what he saw. Bongo, needing answers, yelled at the Rapo to wait. Before that moment, Bongo never spoke out loud. It was a shock to hear. It sounded like the voice of... Polly! Recognizing the voice, Hunter turned around and looked at the Rabbit. Bongo stared into Hunter's face, and said, "I know where Polly is. I think.. she's me." Hunter, filled with all sorts of emotion, picked up Bongo, and hugged him tight.

After that moment in the woods, Bongo and Hunter caught up with each other, and told every story they could recall. They then decided to travel together, and try to solve the mysteries in their path; including finding their parents. All the while, bonding together.

*Any media containing Polly in the form of Bongo goes here and not on Polly's page as to avoid confusion.* 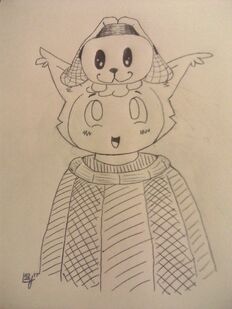 Bongo on top of Hunter's head 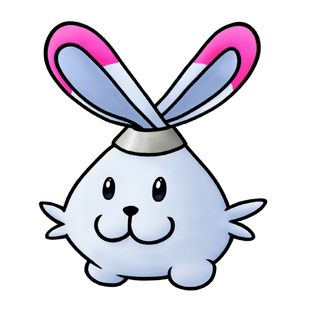 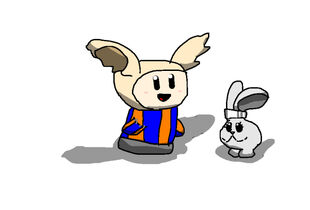 Hunter and Bongo by DaveAndGerald 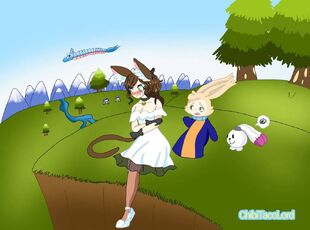 Hunter and Bongo interacting with ChibiTacolord's OC, Prehnite.
Add a photo to this gallery

Retrieved from "https://drawntolife.fandom.com/wiki/User:BreGee/Bongo?oldid=58147"
Community content is available under CC-BY-SA unless otherwise noted.