Julia was a raposa who gained a great desire to create life using magic. She tends to take things very seriously, and doesn't like to express her emotions. She also has a quick temper, and can easily get frustrated when things don't go her way. However, whenever she has her mind on something, she will always stick to it.

Julia is a female Raposa who has dark orange fur with the ends of her ears being brown. She also has red hair that is curly in the back.

She often wears her tribe attire. It looks very similar to Samuel's outfit.

Julia was a Raposa who lived a long time ago. She was a member of a group of reserved Raposa. The group for a majority of the time, was mostly secluded from society. Over the many years of the groups existence, it has been called a tribe, club, and even a cult. These Raposa specialized in nature, physics, and magic. One of the well known members of this group is Samuel.

Julia became especially interested in magic. She was really fond of how the Creator used magic to create not only objects, but life itself. Magic was all around the place, and made up everything in their world. She began to research on how to create life. She looked through spell books, history books, and even tried to create spells and charms of her own. Members of the group soon learned of Julia's plans, and looked down on her for trying to do the Creator's job. The tribe eventually shunned her from the group, resulting Julia to escape the tribe and isolate herself. Regardless, Julia continued to research.

After many years of hard work, she finally made a breakthrough of sorts. With a series of spells, she could take an object and use surrounding magic in the air to bring it to life. However, the magic never lasted long. It never lasted more than a few hours. She grew increasingly frustrated, growing angrier and angrier each time she tried.

One day she stormed out of her home in one of her tantrums, and went into the deeper woods. As she was slowly calming down, she saw a flying rabbit. It was quite a rare sight to see, as the species was endangered. Only a few existed. After watching the creature for a while longer, Julia went back home and looked up more information on flying rabbits. She then decided that she would bring back this species in her own way. She worked harder than ever before.

Instead of using random objects as her test subjects, like she used to, she started to use a doll based on the flying rabbit. Julia's increased passion, as well as using a more creature-like object, made the spells much more effective. However, it still didn't last very long. She began to grow angry again. Every once in a while, Julia used spells and potions at random, not even paying attention to what they did.

One day, Julia decided that just using free flowing magic wasn't working. So she cast spells on the doll so it could absorb magic from objects and living beings. She was hesitant on doing this, since she knew it could potentially put her in danger. Julia was getting increasingly desperate for a success, so she went through with it anyway.

After a few days passed without signs of life, Julia grew worried. Even with just free flowing magic, the doll would come to life for a brief moment before going limp. She didn't know what was happening. After a good amount of observation, she realized that the doll wasn't using up any of the energy. Instead, the rabbit doll was storing the energy until it could be stable. Julia was impressed, yet somewhat disappointed. It would take a long time until the doll could absorb enough energy. She didn't know exactly how long it would take, but she was determined to see her work come to life.

For the rest of her life, Julia would do her best to speed up the process. She used spells, potions, and charms. When those failed, she would surround the doll in magical objects. She even resorted to killing wildlife. Nothing worked. She didn't even get very close with her final efforts.

She eventually worked herself to death. When Julia died, her soul released from her body. The doll being nearby, absorbed Julia's soul. The doll finally came to life. While it obtained Julia's soul, it didn't have any memories. All the doll knew was that it needed more of its kind.

The doll wandered around, and found a Raposa village in the woods. When it came across a Raposa, it felt the urge to attack them. The doll jumped at the Raposa, hitting them with their helicopter ears. The day afterwards, the doll found the Raposa inside their home. The rapo was sewing together a flying rabbit doll. Proud of its success, the doll went on to attack more of the Raposa.

Over time, the doll saw the cursed Rapos carry around the dolls they made everywhere they went. When one of them would die, a flying rabbit doll took their place. And each one would go around cursing any Raposa in sight.

Not many Raposa live in the forest region anymore. Everyone that used to live there either died or ran off to live elsewhere. Due to the lack of Raposa, flying rabbit dolls began to slowly die off. Some say that the original flying rabbit doll is still out there somewhere. 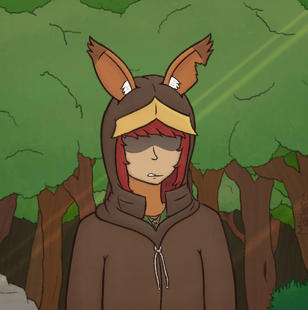 Julia by Manere
Add a photo to this gallery

Retrieved from "https://drawntolife.fandom.com/wiki/User:BreGee/Julia?oldid=56777"
Community content is available under CC-BY-SA unless otherwise noted.