“That's the dumbest rule I ever heard! Ever!”

Polly is a raposa who used to live in the Raposa Village. She is Hunter's younger sister. While she is sometimes extremely hyperactive and sassy, she is a very kind individual. Polly sometimes puts other people's happiness before her own. She also has a small tendency to act before she thinks.

Polly is a young raposa with brownish orange fur and curly light brown hair. She wears a light green dress with a single white button. The button on her dress is the same kind that is on the outfits generic raposa girls wear.

While her eye color is never specified, it usually ranges from a bright blue to a bright green.

Polly was born in the Raposa Village. She lived with his parents, and her older brother Hunter. One day, Hunter became fascinated by a Baki, and eventually began to sneak into the woods to observe them. Ever since Polly found out about his secret trips, she begged Hunter to take her with him. After threatening to tell on him, Hunter finally caved in and took her with him.

Everything was going well in their trip at first. Aside from Polly being there, everything was normal as usual. At least it was until Polly spotted a certain Flyin' Rabbit. Once Polly and the rabbit locked eyes, the rabbit targeted her, and put her in a temporary trance. The Flyin' rabbit then proceeded to attack Polly, and put a spell on her. Hunter, unaffected by the spell, scared the rabbit away from his sister. Polly eventually went back to her usual self. However, that spell cast on her caused her to make a doll somewhat similar to the rabbit that attacked her. Hunter, along with their parents, were unaware of any sort of spell cast on Polly.

When Hunter left, nobody in the village seemed to know what happened to him. However, many theorized that the darkness took him away. Polly, knowing about his visits to the forest, quickly began to think the same. Not long after he disappeared, Polly decided to look for Hunter herself. Taking her doll with her, she walked up the wall of shadow and called out to Hunter. She didn't get a response, so she began to walk closer. Before she could enter the shadows, Cricket saw her near the wall of darkness. He then grabbed her by the arm, and tried to take her away from the scene. During the commotion, Polly dropped her doll. Seeing her doll on the ground, she escaped Cricket's grasp, and ran to get it. While she got her doll back, the shadow wall began to grow closer to her. Before the shadow could engulf her, Cricket carried Polly away. He then brought her home, and told her parents what occurred. They then decided to move out of the village thinking it would be best for their daughter.

A few months after the incident, Polly and her parents left the village to search for a better life. Polly was very upset, and refused to leave several times before giving up. The family left though the village entrance, and entered the wilderness. They eventually found a spot to build a temporary home to sleep in for a while. Polly and her family had finally gotten used to the place, when something terrible happened. One day she woke up to find her parents missing. Polly searched the building from top to bottom, but couldn't find anything. She then decided to wait for her parents inside the house. After waiting for several hours, Polly began to fall asleep. By the time Polly was fast asleep, her doll got up and out of her grasp. The doll then attacked Polly, and absorbed her soul.

The village never knew what became of Polly, Hunter, nor their parents.

*Any media containing Polly in the form of Bongo goes on Bongo's page and not on Polly's page as to avoid confusion.* 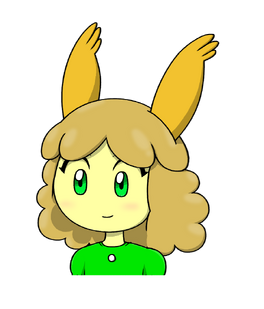 Polly by Crystal Lugia.
Add a photo to this gallery

Retrieved from "https://drawntolife.fandom.com/wiki/User:BreGee/Polly?oldid=58145"
Community content is available under CC-BY-SA unless otherwise noted.