Crystal Lugia is usually quite shy and does not like to reveal herself to others; but she becomes friendly when she gets to know them. She can appear distant to others, and is easily flustered and doesn't like uncomfortable situations or being out of her comfort zone. When faced with a very troublesome situation she will generally not know how to handle it and sometimes go into a state of shock. Although generally very docile and difficult to anger, when she becomes enraged, she can lose control of herself and cause a lot of damage – both to herself and to those around her. This is one of the reasons she secludes herself and tries to prevent contact with others, such an event having happened once in the past, and her not wishing for it to happen ever again. Despite her general policy of antisocialism, however, she has a caring and compassionate personality. Her genuine wish is to be able to help others, but her shyness and fear of inadvertently causing harm prevent her from doing so effectively.

Being a Legendary Pokémon, and in addition to that a Crystal Pokémon, Crystal Lugia is very powerful; however, she rarely uses her full range of abilities or fights unless she is pushed to.

Crystal Lugia used to live in the Pokémon world, in the ocean near the Whirl Islands in the Johto region. However, one day whilst she was swimming in the depths, she unknowingly passed through a portal that led to the Raposa World's ocean. Unable to find her way back or even realising at first that she had travelled so far, she remained in the Raposa World, travelling the oceans, and has stayed there ever since.

She used to occasionally visit the Raposa in their villages; mostly near the main Raposa Village. However, after a decade, she stopped, secluding herself in the ocean. Many years later she decided to go back again, to see what had changed, and met and befriended Jak at the Hidden Beach. Jak and Crystal quickly formed a friendship due to their similar circumstances and shared confusion about them; also, Jak reawakened Crystal’s desire to return to her own world, which she had given up on a couple centuries ago. After a few months, they decided to try investigating possible ways to return to their own worlds, but have not made much progress so far.

Whether or not the portal Crystal Lugia originally went through still exists is unknown.

Crystal Lugia is a fully-grown Shiny Lugia. She has a streamlined body with both avian and draconic characteristics, and a very large wingspan of 5.0 m (16'05"). She has smooth pale silver-white feathers all over her body, except on her belly, where they are pink. She has pairs of rigid dark-magenta fins on her back running down her spine; on her tail; and on her head.

Since she is a Shiny Pokémon, she occasionally lets off pale blue sparkles.

Jak is Crystal Lugia’s main friend in the Raposa World.

They have a fairly close friendship, and are the only two Raposa world inhabitants that know each other’s full situations. Crystal Lugia has been helpful in triggering the return of some of Jak’s memories.

All Pokémon have special abilities, of varying types and strengths. Some of these take the form of moves or attack techniques, some as Types, some as, specifically, Abilities, and some simply as characteristics or stats. Each species of Pokemon has its own strengths and weaknesses, and even individuals are very diverse.

All Pokémon have at least one type. Some also have secondary types.
Lugia is a dual-type Pokémon; which means it has two types. Its primary type is Psychic, and its secondary type is Flying, making it a dual Psychic/Flying-type.

Each Pokémon is classified on a level from 1 to 100. This indicates how much training they have received, whether in the wild or under the guidance of a Trainer, and how much farther they can grow (if at all). Needless to say, the higher a Pokémon’s level the stronger it is.

Crystal Lugia is at Level 65. It is much stronger than an average Pokémon, on par with high-level Trainers’ Pokémon, and above the average level for a Legendary Pokémon.

Lugia can learn a wide variety of moves. Many of these are support or status moves, in place with its role as a defensive Pokémon. Lugia also has a signature move; that is, a move that only it as a species can learn. This move is Aeroblast. Aeroblast is a Flying-type move and is classified as a Special attack, as it is nonphysical. It has a power of 100 and a high critical-hit rate (meaning that it often deals double-damage or hits for twice as much damage than normal).

Crystal Lugia knows many of these techniques, although she uses few of them, and not all that often. Generally, she will choose a support or status move over an attacking one.
Some of her known moves include: Flash, Ancient Power

Lugia can have either of two abilities – Pressure, or Multiscale. Pressure causes the opponent to expend more energy whilst fighting, and lowers the amount of times they can use powerful attacks. Multiscale reduces the amount of damage taken when at full health or HP.

Pressure is the normal ability or the ability that most Lugia have, whereas Multiscale is a Hidden Ability, meaning it is very rare for an individual to possess it.

Crystal Lugia has the Hidden Ability. Therefore, her Ability is Multiscale.

Base stats, or species strengths, are the general values and strengths of a Pokémon species as whole. Although the stats of individuals may vary, these are the "base" upon which all their strengths are built.
Lugia as a species are defensively-oriented Pokémon. They have high defences and stamina, and lower attack stats. They are also fairly fast.

Crystal Lugia's stats are built upon these bases.

Natures, along with describing personality, affect stat growth, often cause some stats to grow more faster than others or hinder others in their growth. Each individual Pokémon has a specific Nature.

Crystal Lugia has a Timid Nature. In addition to describing an aspect of her personality, this means that she is faster than an average, but her physical attack power is lower.

Each Pokémon, upon their base stats and with the guidance of their Nature, can train themselves to be particularly strong in certain areas. They may choose to balance their skills or train up a particular one or two. That is part of what makes each Pokémon an individual.

Crystal Lugia has trained herself to be fast, and able to endure attacks.

Lugia are classified as "Legendary Pokemon"; that is, they are both very rare, and unusually powerful. This power may include both their stats, which surpass those of ordinary Pokemon, but can also include certain powers unique to the species. Lugia are known to have the ability to control the weather; particularly, storms. The legend goes that they can create a 40-day storm with just a single flap of their wings, but because of this, they isolate themselves in the depths of the sea in order to protect others. Thus, and because of their strong association with storms, they have been called the "Guardian of the Sea".

Like others of her species, Crystal Lugia has some control over the weather; however, she cannot control her power to the same extent as them. Therefore, she is more likely to cause an accidental storm, or be unable to stop one. This is one of the reasons she avoids contact with others.

Like all Lugia, Crystal Lugia spends much of her time in the water, and is a very good swimmer. She has a streamlined body shape which reduces resistance in the water and enables her to swim powerfully, and is thus well-suited to living in an underwater environment.

Crystal Lugia is also very good flyer; perhaps even more so than others of its species, since she spends more time out of the ocean than average. She has large, powerful wings, and the streamlined shape that helps her whilst swimming also creates less resistance whilst flying. 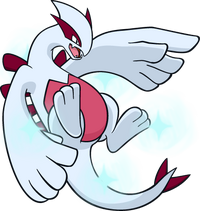 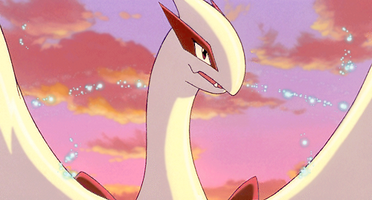 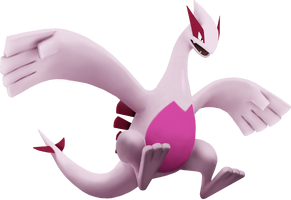 Retrieved from "https://drawntolife.fandom.com/wiki/User:Crystal_Lugia/Crystal_Lugia?oldid=55387"
Community content is available under CC-BY-SA unless otherwise noted.