Jak's memory playing tricks on her.

Jak is a young female Raposa currently living in the Raposa Village.

She often acts scatterbrained and silly, making comical remarks or actions, and enjoys making others laugh. However, she is actually very serious and quite smart. She can be shy when around people she doesn't know well, and usually does not talk to them; if she does, they may see more of a “mask” then her actual personality. However, she may get irritable or snarky when around people that she thinks are prideful or pushy. She can, at times, also be critical and cynical, especially if she sees a problem with what someone or something is doing; or if someone claims to be a certain thing and acts in a way that she thinks contradicts this. In a discussion, she will relentlessly point out flaws in justification logic, sometimes in a manner bordering on derisive. She is quite a perfectionist and has very high standards of morals and work.

Despite often coming across as having a carefree personality, she is also quite prone to anxiety, and tends to make situations out as worse than they really are. She will often assume worst-case scenarios, and as a result often ends up "jumping at shadows" and making mistakes because of it. Currently she is working to overcome this; although her progress tends to fluctuate.

Jak is very supportive of her friends, though they are few. Generally, if something is said that is disparaging towards them, or something happens to hurt them, she will become defensive, indignant, or sometimes even angry. However, this does not make them exempt from criticism when she feels they are wrong or could be doing better. She hates not being able to help with problems.

One day, Jak as a human was sucked through a portal into the Raposa world. During this event, she somehow changed from a human to a Raposa. She was carrying her laptop with her at the time.

She found herself in Twilite Wood, and wandered around, completely lost, in the Forest Gate's worlds for a little while. In Gearworks she was chased by a Treepet, and fell down a cliff, breaking her laptop and hitting her head hard enough to knock her unconscious in the process.

When she woke up, she could not recall either her full name or where she had come from, her initials being the only personal details she could remember. She also could not remember that she was originally a human, but could recall many other seemingly random things, without any clue as to why or how she knew them. Eventually, she found her way to the Twilite Wood Exit Gate, and left the Forest World. Upon then finding herself in the central Raposa Village, she decided that she would stay there until she could recall more about her past and learn about the Creator, and took up a position as a freelance artist and writer. She also found a job as a library assistant, as the other two jobs could not earn her much especially initially and she needed income so that she could find lodging and pay for other necessities.

After a few months, she met and befriended Crystal Lugia. Crystal Lugia triggered the return of some of Jak’s memories, including, eventually, the recollection that she was not originally a Raposa, and the two began searching for ways to return to their original worlds, although they have made little progress so far.

Jak is a teenaged female Raposa of average height, being about 1.65 m (5'5") tall, not counting the extra height added by her ears; with the additional height from her ears she is 1.86 m (6'2") tall. She has a very slender build. She has long, dark brown, curly hair and dark brown eyes. Her hair is almost always tied in a ponytail, supposedly to keep it tidier, but even then it is still quite messy.

Jak usually wears a dark-purple hoodie along with three-quarter dark blue denim shorts and white sneakers and socks. She wears a light purple shirt under her jumper. The scrunchie she uses to tie her ever-present ponytail is also purple. If the weather gets colder she wears longer pants, and if it gets warmer she takes the jumper off. She dislikes any sort of immodest clothing and has a preference for plain clothes.

Crystal Lugia is Jak’s main friend in the Raposa World.

The two find comfort in each other’s similar situations and give each other hope in that they’re not alone, and a renewed desire to return to their own worlds. Jak often encourages Crystal Lugia to keep searching for answer even when it feels that they will never find any.

Jak has met Villar once during her time in the Raposa Village, shortly before meeting Crystal Lugia. Whilst he never acted in a suspicious manner, for some reason Jak felt uncomfortable around him and so was distrustful of him. He offered to help her find out more about herself but she declined the offer because of the above sentiments. She feels there is far more to him than meets the eye.

Jak enjoys and is quite good at drawing. She is best and most at home with paper and pencil, but is also learning and getting better at creating digital art with drawing tablets and computer programs. She will often trace out imaginary pictures with her hands on other, preferably smooth surfaces, or even in the air, if no proper drawing materials are available. However, she is not so good at painting.

Jak is quite a good piano player and enjoys playing classical or classical-style pieces. She also enjoys composing tunes for herself and has even on occasion attempted to put them down in physical format, sometimes with more success, sometimes with less.

Jak has some field knowledge of wild plants, and is able to identify many common edible, medicinal, and poisonous plants that she comes across from memory. She can also remember certain specific qualities and requirements of plants in terms of how they should be harvested and used.

Due to her investigative and critical nature, Jak is good at being given a topic and rooting out the "real" facts about it, scrutinising all the arguments for or against something, and testing them to see which ones have the strongest backing from all the evidence available (along with checking the validity of the evidence itself). She then enjoys putting together and presenting her conclusions and explaining them, although the way in which she does so leaves something to be desired.

She finds some satisfaction in taking faulty theories and shooting them full of holes.

Jak is reasonably fit and has great stamina for walking, though not so much for running. She is very observant and has extremely good hearing, along with being able to sneak around very quietly, she sometimes uses this to pick up information without being noticed. 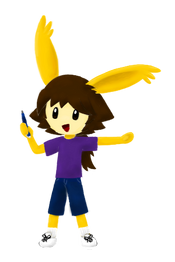 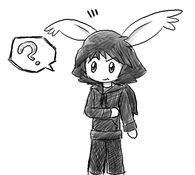 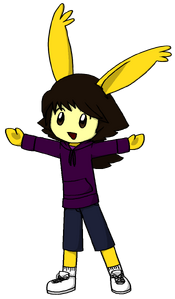 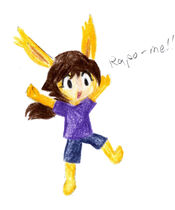 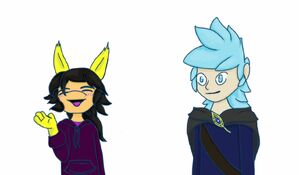 Jak and Ice by The lone shadowbat.

Jak Icon by BreGee.
Add a photo to this gallery

Retrieved from "https://drawntolife.fandom.com/wiki/User:Crystal_Lugia/Jak?oldid=55388"
Community content is available under CC-BY-SA unless otherwise noted.