Village Hall is a building in Drawn to Life meant to be a centralized point of meeting, storehouse for The Book of Life and, later in the game, a way of telling time through use of the clock. The Village Hall is one of the first buildings the player sees after drawing The Hero and is where the Mayor most often resides after he is rescued from the first "tutorial" level. After every level, the rescued Raposa will return to Village Hall to speak with the Mayor before he places the returned page in the Book of Life. After the festival takes place, the Mayor will ask The Creator to draw clock hands to fix the clock on the tower portion.

The Village Hall is a tall, tower-like building with an orange pyramid roof with slight upward curves at the vertices. A blue valance canopy is above the entrance; and there are two chimneys on the building. 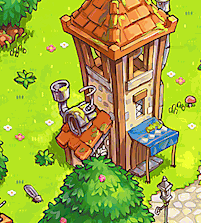 The Village Hall takes a more isometric style in Drawn To Life: The Next Chapter.
Add a photo to this gallery
Retrieved from "https://drawntolife.fandom.com/wiki/Village_Hall?oldid=57109"
Community content is available under CC-BY-SA unless otherwise noted.