“Once you have accomplished this for all 3 villages, the barrier will be unlocked for you.”

Volcanic Eruption is the fourth level in Wilfre's Wasteland in Drawn to Life: The Next Chapter. This level is themed after levels played prior in Lavasteam, particularly Mine Cart Mayhem. This level utilizes a standard layout, moving left-to-right through level "sections", in addition to using a Minecart mini-game segment throughout portions of this level. Due to this, the Mine Cart creation is used here.

In addition to the Mine Cart, there is also a flood of lava that chases The Hero near the end of the level, forcing the player to continuously move forward toward the goal.

The Mayor explains that Wilfre has created an almost impenetrable barrier around his castle. He then tells The Hero that they must gain the power of the three villages, and from each they must construct a pedestal and obtain an orb. Once this is done, the barrier will be broken allowing them to get through to Wilfre. 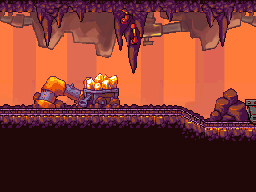 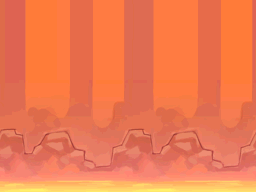 The backdrop for this level.
Add a photo to this gallery

Retrieved from "https://drawntolife.fandom.com/wiki/Volcanic_Eruption?oldid=57651"
Community content is available under CC-BY-SA unless otherwise noted.