Wilfre's Wasteland is the last world visited in Drawn to Life: The Next Chapter.

Wilfre's Wasteland is an amalgamation of the three previous villages The Hero has visited (Watersong, Lavasteam, and Galactic Jungle). After completing the two levels for each village, Wilfre's Castle can be colored to make it accessible. It has three levels including the final battle against Wilfre. This battle takes place in Hall of Darkness.

The Mayor himself appears to help The Hero at this point. It is most likely his spirit, though he is not transparent like at the end of Drawn to Life.

Wilfre seems to have torn the pages of other areas to make this realm. 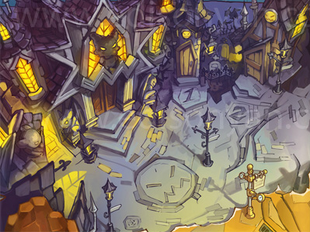 The Hall of Darkness entrance 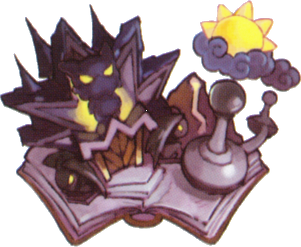 Wilfre on his Cloud Chair as the Final Boss 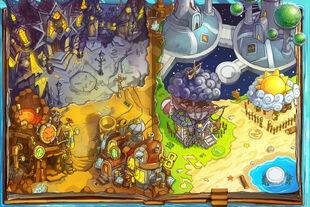 The entirety of Wilfre's Wasteland
Add a photo to this gallery
Retrieved from "https://drawntolife.fandom.com/wiki/Wilfre%27s_Wasteland?oldid=60506"
Community content is available under CC-BY-SA unless otherwise noted.