“Draw a silhouette in the window.”

The Window Silhouette is a creation in Drawn to Life: The Next Chapter (Wii) that is drawn in Shadow City.

Once drawn, the Window Silhouette will appear in specific windows. They have no impact on game play whatsoever, and are purely cosmetic.

Due to the Window Silhouette being a creation object, the appearance of this object is completely dependent on the player.

The preset drawing for this creation is a humanoid creature with two horns, two eyes, a mouth, and two, four-fingered arms. 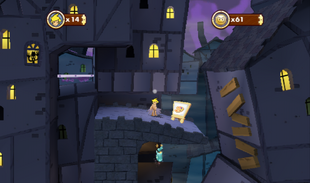 The area where this creation is drawn.
Add a photo to this gallery
Retrieved from "https://drawntolife.fandom.com/wiki/Window_Silhouette?oldid=59863"
Community content is available under CC-BY-SA unless otherwise noted.