Drawn to Life Wiki
Register
Don't have an account?
Sign In
Advertisement
in: Drawn to Life, Snow Gate, Enemies,
and 4 more

Not to be confused with the Wii enemy.

Yetis, also known as Snow Pounders, are enemies found in the Snow Caves in Drawn to Life.

Yetis walk around areas in the level. When The Hero gets too close to them, they pound the ground with their fists, sending a wave of snow at The Hero in an attempt to damage them with it.

Yetis are large creatures covered with tan fur all over their bodies, except their hands, where they have light skin. Yetis have yellow tufts of fur on their chests and around their wrists and wear snow kabuki masks.

They bear resemblence to sumo wrestlers. 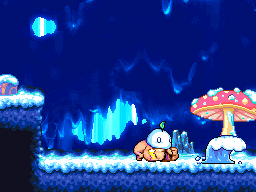 A Yeti in a level.
Community content is available under CC-BY-SA unless otherwise noted.
Advertisement