Drawn to Life Wiki
Register
Don't have an account?
Sign In
Advertisement
in: Non-Canon, Icy Wastes, Enemies,
and 2 more

Not to be confused with the DS enemy.

Yetis are common enemies in Icy Wastes, the third gate in Drawn to Life: The Next Chapter (Wii). They appear in every level, in this gate except Chamber of the Eternal Furnace.

Yetis will roam around their predetermined area until they notice the Hero. When they do, they will roar and charge towards the Hero, swiping .

Yetis are tall, hairy monsters that are about three times the size of the Hero. They are covered in entirely white fur and have two, long, black, curved horns protruding from the sides of their heads. They have two white, bulbous eyes, a large nose, and a frown with six yellow teeth poking out from the sides. On the top of their head, they have a large, red bump. 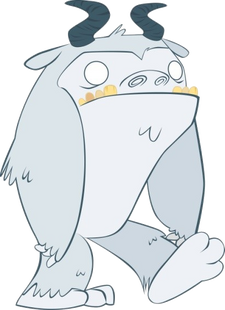 The Yeti as seen in concept art for the game.