Zsasha is a Raposa who appears in all three Drawn to Life games.

A Raposa thief and Cricket's rival, Zsasha can usually be found stirring up trouble in one way or another. He claims that he cannot be caught, but usually feels bad for what he has done and ends up giving back what he steals. At the end of Drawn to Life, Zsasha reforms and begins to care for a young RapoGirl, who calls him "Zasha" or "Zwasha."

As a master thief, Zsasha is as stealthy as the night, yet his goals and ambitions are rather mixed up. Instead of keeping the items he steals, Zsasha ends up expressing remorse for his actions and usually returns them to their original owners. Although his actions are illegal, the thief is not evil at heart and he seems to just be a kleptomaniac with no intention of hurting anyone, and is just driven by the need to steal. Zsasha has also shown a much softer and protective side when he took a lone Raposa girl under his wing and begins to care for her. He is now mostly reformed, but occasionally loses control over his weakness for thievery, fueling his long-standing rivalry with the chief of police, Cricket.

Zsasha is an adult male Raposa with light-grey fur. He is a master of the night and always dresses in purple clothing to further his stealth. He also has a black belt with a golden buckle that appears to serve no use. Zsasha accessorizes himself with a tied-on mask that matches his clothing.

In his Wii form, Zsasha's clothes and mask are colored in a more purple tint.

Before Drawn to Life Edit

Not much is known about Zsasha's background before the events of Drawn to Life; however, he obviously has a long history with Cricket. After Wilfre's tearing of the Book of Life, he was at some point captured and imprisoned by Shadow in the Twilite Wood.

Zsasha is first seen in Drawn to Life when he is rescued by The Hero in the Twilite Wood, but when they get back to the village, instead of going to see The Mayor as the other recovered residents do, Zsasha does not come out. He remains in the Gate until later that night, when he exits. Using the newly drawn cover of the night, Zsasha steals Cookie's cutlery, Farmer Brown's Banya seeds, and the flower that Jowee planned on giving to Mari at the festival. After these items were reported missing, the Mayor sends the Hero out to find the Moon page from the Book of Life.

Using the illumination of the light of the moon, The Hero (along with the recently rescued Cricket) mount an investigation to find the missing items and the thief. Each time Zsasha is uncovered, he returns another item he has stolen; however, Jowee's Flower is not retrieved and the festival is approaching quickly. Zsasha remains at large as The Hero goes out and saves NavyJ, while Jowee runs out of time, as the famous singer is set as the entertainment for Mari's mayor training celebration. As Jowee gives Mari his backup gift (a book about whales) Zsasha comes out into the open, returns the flower, and escapes once more.

At the end of the game, Cricket finally catches Zsasha, but finds that his rival has been taking care of a young Raposa girl. With this revelation, Cricket decides to allow Zsasha to stay in the village, albeit always keeping the thief under his watchful eye.

In the DS sequel, Zsasha returns, as a resident of the Raposa Village. When Wilfre returns and steals the village's color, the reformed thief is transported to Galactic Jungle, where, after being chased by Cricket, is arrested by the S.P.U.D. for running in a clearly marked no-run zone.

Zsasha is later rescued from Techno Spires by the Creation Hero and lives on the Turtle Rock Village. 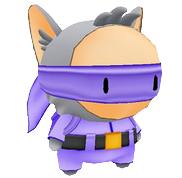 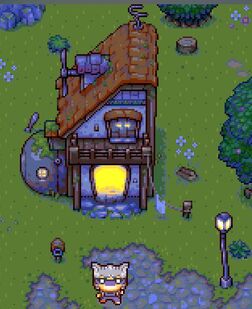 Zsasha leaving a house
Add a photo to this gallery
Retrieved from "https://drawntolife.fandom.com/wiki/Zsasha?oldid=57952"
Community content is available under CC-BY-SA unless otherwise noted.